I often get messages from acquaintances or friends of friends who’re curious about how I got started with freelancing.

As much as I don’t mind sharing a few tips via message, I reckon the time has come to tell the story and take all hints and tips I’ve handed out and immortalise them in blog form.

This is my freelancing story, but if you’re looking for more practical tips then hop over to my other post on finding work as a freelance translator and copywriter.

I’ll try to be completely honest but hey, we’re all prone to a little bit of sugar-coating. After all, although a lot of it is sunshine and rainbows, I don’t want anyone thinking there hasn’t been a rainy day or several.

So here’s me, trying to tread the fine line between not complaining and not boasting… wish me luck.

Oh, and despite having reached a stage where I’ve got a fairly stable income that I can comfortably support myself with here in Spain, I’m not exactly raking in vast amounts of cash (yet!).

I’m still very much at the beginning of my freelancing journey, with one hell of a lot to learn.

I haven’t done anything in a particularly conventional manner, and there’s been plenty of luck involved and buckets of determination, but hopefully, there’ll be something in here that you’ll find useful if you’re serious about following a similar path.

Where it all began

I studied BA Spanish and Portuguese at the University of Southampton, graduating back in 2016.

I don’t mind admitting that I didn’t have the foggiest idea about what I was going to do with my life when I graduated, but I was pretty sure that it wasn’t going to include going into an office from 9-5 every day.

While there’s absolutely nothing wrong with that, it’s just not my style.

I really don’t enjoy alarm clocks, (I know, who does?) and have never been one for routine. The idea of having to ask someone’s permission to go on holiday has never been an appealing one.

I’d started a personal travel blog to record my experiences whilst living and working in tourism in Bonito, Brazil on my year abroad, and I’d really got the writing bug, so started writing travel and lifestyle pieces for the university newspaper.

My wonderful, inspirational cousins run the fashion-focused copywriting agency Siblinc and they were kind enough to give me my first taste of copywriting work, which I adored.

The novelty of being paid to just sit at my laptop and write blog posts for them was incredible. I was hooked.

It was when I was looking around for other writing work online that I noticed there were lots of people out there offering translation services, too.

This is going to seem strange, but despite having already been studying languages for three years, the idea of going into translation had never really occurred to me.

However, I was doing translation modules as part of my final year and proving to be pretty good at it, if I do say so myself. I’d realised how vital good writing skills were to be a good translator. So, I decided to give that a whirl too.

To cut an already very rambling story short, I offered my services for (I have to admit) next to nothing on the freelancing sites Fiverr and Upwork for both writing and Spanish and Portuguese to English translation.

I was in the very fortunate position of not really needing the money, so it was just an extra that I enjoyed and was wonderful positive procrastination.

I graduated having already secured a part-time English teaching gig in Colima, Mexico, starting that October, and had the summer ahead of me.

I spent my free time in the intervening months starting to put more energy into my freelancing.

Once I was in Mexico I was only working a 12-hour week as an English teaching assistant, but my salary was covering all my rent and living expenses.

That meant I got to spend the rest of my week writing and translating and not spending a penny of the modest dollars and pounds I was earning, saving those up for adventures at Christmas and Easter with a nice cushion for when I got home.

By the time May 2017 rolled around and I’d spent eight months in Mexico working on my freelancing, I was starting to earn enough to prove to myself that I could really make a go of it.

At some point during my time in Mexico, and I can’t quite put my finger on when, it had morphed from being something I was doing to fill my free time and earn extra money into something that I realised I could actually make a living from long term.

Without that job in Mexico, I doubt whether I’d have ever got started freelancing.

I had the luxury of having enough money to support myself whilst I grew my client base (charging next to nothing) and had plenty of time to dedicate to it. 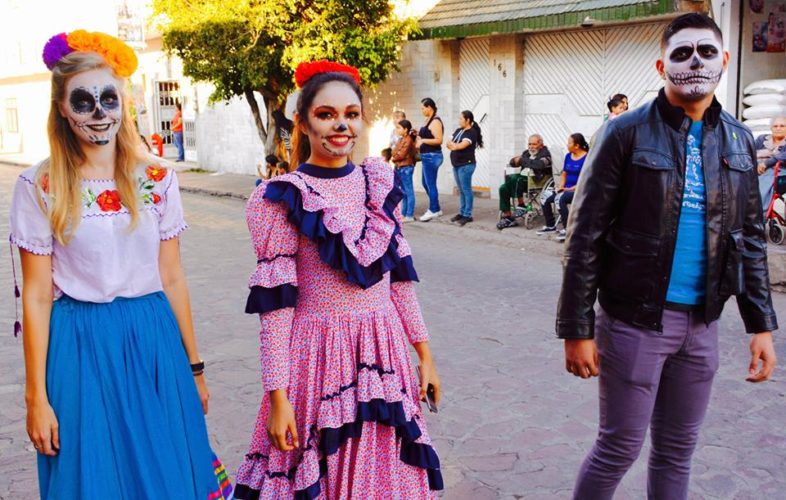 Having finished up my placement in May 2017 and spent a month travelling and doing very little work, I arrived back in England.

My goal was to be financially stable enough to be able to move to Granada in January to live with some friends I’d made in Mexico.

There isn’t all that much to do in Cornwall when the sun isn’t shining (which it wasn’t) so distractions were minimal, and I wasn’t short of motivation.

I (finally) started raising my rates and said goodbye to a few low-paying clients I’d had from day one.

My aim for the whole of 2017 had been to create a website so that I and everyone else could start taking me more seriously.

I agonised over my domain name for a ridiculously long time, before finally settling for… my own name (as you may have noticed). Time well spent. Not.

As 2018 loomed I pulled myself together and finally went public on New Year’s Eve. Having a website made a huge difference to the clients I started landing from then on.

I stuck my head in the sand about learning to use CAT (Computer Assisted Translation) tools for far, far longer than I should have.

It all seemed far too complicated and, as we’ve established, I seem to enjoy putting things on my to-do list and then waiting a year before doing them.

Eventually, however, I embraced them. They’re wonderful, not as scary as they seem, and just as useful as everyone said they were. Surprise surprise.

I now use Memsource and have a Trados 2019 licence, which is pricey (~£400), but an essential tool to have in order to land lots of translation gigs, and the first job I got using it back in 2018 paid for it many times over.

Where I stand today

I moved out to Granada as planned in January 2018 and have been here ever since. The cost of living is relatively low, allowing me to save whilst still having plenty of adventures.

I’ve had peaks and troughs over the last year, with months where I was raking it in, and inevitable quiet months.

Those ups and downs might seem a little scary, but they’re a reality of freelance life. Thankfully, living in Granada with no responsibilities but myself, I can easily cover my living expenses even in a bad month.

My hours vary hugely and have changed to adapt to the Spanish lifestyle. I don’t set an alarm unless I’ve got a particularly pressing deadline or somewhere to be.

I generally half-heartedly try and work in the mornings and fail because my brain isn’t in gear, then go out to the shops or for a run and have a late lunch.

Primetime for me is between about 4pm and 8pm. I sometimes take the whole week off, and I sometimes work 7 days.

I try not to touch my laptop at the weekend, but if I have a big deadline pending I’ll sometimes work a little on Saturday or Sunday.

Generally, I’ll stick to a normal working week, mostly because everyone else is busy Monday to Friday so I only have adventure buddies at weekends.

But if there’s one thing I’m good at it’s not pushing myself too hard and taking plenty of time for me on a day to day basis. I’m very aware of how my privilege plays into this.

I’ve never experienced the burnout that a lot of freelancers do, but it’s clear how incredibly easy it would be to fall into that trap. 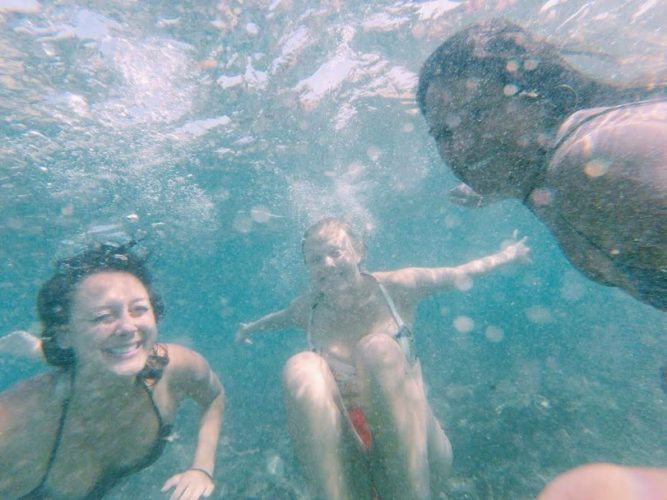 I won’t be sharing my exact rates here because I’ve seen the controversy that this topic causes amongst translators in Facebook groups.

All I’ll say is that my rates work out at a healthy hourly rate, and are much higher than when I started out.

I will, however, admit that I was accepting work when I was just getting started at a measly $0.01 a word, or, I hate to say it, at times even less.

I didn’t ever actually work for free, but I did translate a whole 75,000-word book for next to nothing, so I might as well have done.

There’s an argument for doing stuff for free or for very little to start with, and there’s also a very good argument against it (undercutting others, not being able to buy food, you know, the basics…), but that’s a controversial topic that I don’t really want to get into here.

I was definitely lucky to be in Mexico with very low living costs when I was getting going.

What I will say took me a good year to realise that my low rates actually meant that agencies didn’t see me as a professional, and any agency worth its salt wouldn’t look twice at someone who was quoting was I was.

But equally, they probably wouldn’t look at someone without any experience either, so go figure.

Are you a freelance translator or copywriter?

Does your story look anything like mine, or did you take a different route?

If anyone has any questions or would like to pick my brains about something, please leave a comment or get in touch over your preferred social medium. I’d love to chat.

Hi there! I'm Katie. I'm a friendly, location-independent copywriter and translator (SP/PT>EN) based in Zaragoza, Spain. I translate, edit and create memorable, engaging English for LSPs and the ecotourism industry.

WHAT I’VE BEEN WRITING ABOUT

This website uses cookies to improve your experience while you navigate through the website. Out of these, the cookies that are categorized as necessary are stored on your browser as they are essential for the working of basic functionalities of the website. We also use third-party cookies that help us analyze and understand how you use this website. These cookies will be stored in your browser only with your consent. You also have the option to opt-out of these cookies. But opting out of some of these cookies may affect your browsing experience.
Necessary Always Enabled
Necessary cookies are absolutely essential for the website to function properly. This category only includes cookies that ensures basic functionalities and security features of the website. These cookies do not store any personal information.
Non-necessary
Any cookies that may not be particularly necessary for the website to function and is used specifically to collect user personal data via analytics, ads, other embedded contents are termed as non-necessary cookies. It is mandatory to procure user consent prior to running these cookies on your website.
SAVE & ACCEPT